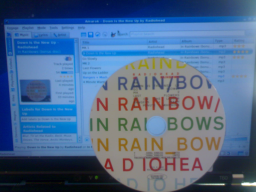 I thought I was getting this for xmas, but I had to wait couple of weeks more to get it. The box includes two albums both in CD and vinyl formats. I got In Rainbows right after it was published as mp3, so I knew half of what I was getting in more touchable format.

Now I got also the bonus disc which has eight tracks I haven't heard before. I been listening it all day and I got to admit, it's much better than I was expecting. First track continues where Video Tape left us. Radiohead could have released these albums as double album and it would have worked perfectly. Well, that's what they actually did, but only for those who bought the disc box.